Chemicals are commonly used in industrial wastewater treatment processes in many different
applications. These include:

1- Removing Solid Particles
Particles in wastewater can be colloidal. These colloidal particles have negative electrical
charges around them that keep them in suspension (like emulsification). In order for these
colloidal particles to separate from the water they need to become larger. Positively charged
cationic chemicals such as ferric chloride or alum can be added to the water to neutralize the
negative electrical charge around the particles. The size of the particles can be increased by
adding a flocculant. The flocculant increases the size of the particles so that they can rapidly
settle or float depending upon the clarification technology used.

2- pH Neutralization
Some industrial wastewater effluents need to be neutralized before discharge to the sewer. The
most common effluent pH discharge limitation is 6.0 – 9.0 su.

Hydrochloric Acid is highly corrosive to stainless steel and other metals. If is a fuming acid so
vapors may pass through out the wastewater spreading the corrosion. Make sure that the drum
or tote is vented outside of the room to minimize corrosion.

Nitric acid will also reduce the wastewater pH. It is commonly used for passivation of stainless
steel. Passivation is the process of treating the metal with acids in order to remove the free
iron from the surface of the metal and coat it with this corrosion-preventing oxide layer. This
passive layer gets damaged through heat or chemical damage due to high humidity levels.

Phosphoric acid will reduce pH of alkaline wastewaters. Phosphoric acid is commonly used as a
laundry sour to neutralize the alkalinity on the textiles. Phosphoric acid is also used in the metal
finishing industry. The largest user of Phosphoric acid is for fertilizer in the agriculture industry.
Phosphorous is strictly regulated by the POTWs because it is classified as a nutrient that is not readily removed in their treatment processes. Phosphorus leads to algal blooms in receiving
waters leading to poor water quality and fish kills.

Organic acid such as acetic acid and citric acid will reduce alkaline pH levels. These acids are not as concentrated as the mineral acids described above. As a result, higher volumes of acid may need to be used to decrease the wastewater pH. These organic acids contain carbon. Carbon is the primary chemical increasing BOD in wastewater. Organic acids will increase effluent BOD. This may lead to elevated surcharges or even non-compliance. Organic acids are environmentally safe and commonly referred to as “Green Chemicals.” They do not contain toxic compounds such as trace heavy metals.

4- Demulsification
Cleaners and Surfactants are often used to clean surfaces of equipment to remove fats, oils,
greases, and synthetic lubricants. The waste stream becomes chemically emulsified or
mechanically emulsified through excessive pumping and flowing through piping with numerous
turns. Similar to colloidal particulates the emulsified particles are negatively charged repelling
from each other not being able to agglomerate to form larger particles that will separate
through flotation or sedimentation. Cationic polyelectrolyte coagulants such as PolyDADMACs
or EpiDMAs are commonly used to break oily emulsified waste streams. Flocculants are added
to increase the particulates to form a sludge blanket and improve effluent clarity.

5- Odor Control
Wastewater treatment sludges and biosolids are common source of odor control. One of the
primary odors in wastewater treatment is hydrogen sulfide which is commonly referred to as
“rotten egg” odor. Odors can be minimized with masking agents but the best method to
eliminate odors is to identify the source and eliminate the source. Adding sodium hydroxide or
calcium nitrate will increase the pH of septic waters and sludges to destroy the sulfide odors.

As an example, sedimentation clarifiers and dissolved air flotation systems that have excessive
solids can become anaerobic leading to septic odors. Improved maintenance through solids
removal will reduce or eliminate these odors. Oxidizers such as hydrogen peroxide or chlorine
bleach can be used to decompose the odor causing bacteria or materials.

6- Disinfection
Pathogenic microorganisms thrive in wastewater, making the water dangerous to humans. To
prevent the spread of disease, these microorganisms must be destroyed or removed from the
wastewater. A common, relatively safe, and inexpensive disinfecting chemical is sodium
hypochlorite, hydrogen peroxide, or peracetic acid may be used in wastewater effluents.
Chlorine and ozone may be applied through gas injection for disinfection.

7- Sludge Treatment and Removal
The sludges that have been generated in the treatment processes need to be removed. Sludges
coming from sedimentation clarifiers or dissolved air flotation contain approximately five to ten
percent solids. Sludges must have no free liquids and be at least 25% solids for disposal in
landfills.

Chemicals such as bentonite clay, lime, and polymers are used to condition the sludge to drive
off water so that the solids can be disposed in the landfill.

8- Defoamers
Defoamers may need to be applied to wastewater effluents especially those that may contain
elevated concentrations of surfactants. Dissolved Air Flotation units have a tendency to
generate white foam due to residual surfactants in the effluent.

Get the latest news and upcoming water usage technology straight to your mailbox. 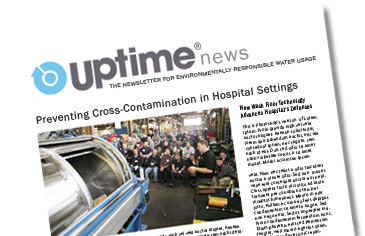